Over a third of the world’s countries have blasphemy laws that violate at least one internationally recognised human rights principle, according to a new report by the US Commission on International Religious Freedom (USCIRF).

Most blasphemy laws are “embedded in criminal codes” and are “vaguely worded”, with “unduly harsh penalties for violators”. Of the 71 countries with blasphemy laws, 86% prescribe imprisonment for convicted offenders, while some, like Pakistan and Iran, even prescribe the death penalty. 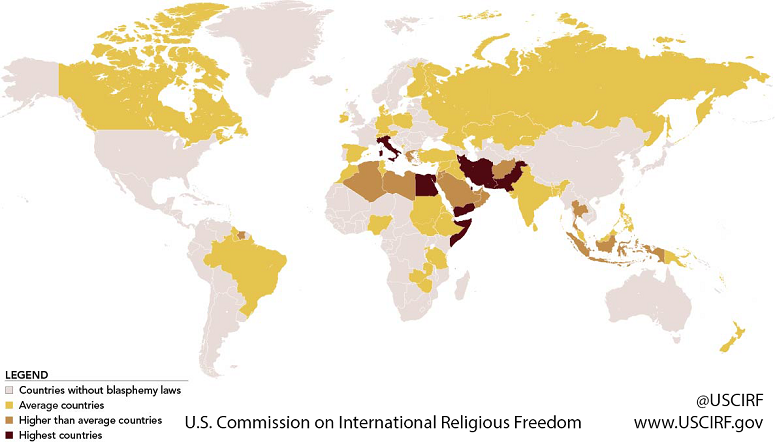 USCRIF notes that all five of the nations that “deviate the most from human rights principles” – Iran, Pakistan, Yemen, Somalia and Qatar – have an official state religion.

In Muslim countries like Pakistan, which is perhaps the most notorious for its blasphemy laws, Christians are often the subject of the accusations – disproportionately so compared to their population size. For example, Pakistani Christians make up only 1.5 per cent of the total population, but over a quarter (187) of the 702 blasphemy cases registered between 1990 and 2014 were against Christians, noted Pakistani newspaper Dawn in 2015.

Recently, several blasphemy cases have been registered against Christians related to their actions on social media. For example, in September 2016, a 16-year-old Christian boy was accused of blasphemy after “liking” and sharing a post on Facebook which “defamed and disrespected” the Kaaba in Mecca, the building at the centre of Islam’s most sacred mosque. He has since twice been refused bail, despite his lawyers’ insistence that, as a child with no prior convictions, he should be released.

A 2011 Pew survey found that only 16 per cent of Pakistanis had a positive view of Christians. Because most Pakistani Christians come from low socio-economic backgrounds, they are often subject to criminal violence, and are sometimes accused of committing blasphemy by people who want to settle personal scores or take their land or property.