According to The New York Times, the priest was rescued late on Saturday (16 September) by the Philippines military, as it moved closer to rooting out the remaining gunmen from one of their last strongholds, the Bato Ali Mosque.

The Philippine Star, however, reports that the priest managed to escape amidst heavy fighting and was picked up by the military after they reclaimed the mosque where he had been held captive since 23 May.

Father Suganob managed to escape together with Ms Lordvin Ocopio, a teacher at Dansalan College, a Protestant-run college in Marawi. She was one of several teachers taken hostage when the Maute group started its siege of the city on 23 May. The Maute brothers, from whose surname the Islamist group derived its name, once attended the college.

It is not known how many people still are being held hostage by the group. According to a resident who was able to escape on 23 June, there were as many as 100 Christians being held then.

The New York Times reports that it is estimated that 40-60 militants are still in the city, while, as of Saturday, the death toll from the fighting since May included 47 civilians, 149 soldiers and 668 militants. Meanwhile, hundreds of thousands of civilians have fled to refugee camps and large parts the city are destroyed. 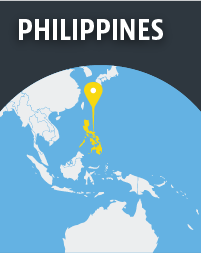 Father Suganob was abducted by the Maute group, along with some other parishioners, at the beginning of its assault on the city, which is overwhelmingly Muslim (99.6%), on 23 May.

A few days later, a video was released in which the priest asked Philippines President Rodrigo Duterte to “consider” hostages’ lives and stop bombing the city, saying he was one of around 200 hostages.

In June, it was reported that the priest had been seen alive and that his release had been offered in exchange for the parents of the Maute brothers. However, Justice Secretary Vitaliano Aguirre II responded that “the government never negotiates with terrorists!”

President Duterte added that he would not negotiate with militants who had pledged allegiance to IS. He vowed to “crush” IS’s presence in the country, saying: “Anyone now holding a gun, confronting [the] government with violence, my orders are spare no-one, let us solve the problems of Mindanao [the province in which Marawi is situated] once and for all.”

He also declared martial law for the whole region of Mindanao shortly after the siege started.

Although the Philippines is a majority-Christian country, the southern island of Mindanao has a strong Muslim presence and is home to a number of violent extremist groups – including Maute, Abu Sayyaf and the Bangsamoro Islamic Freedom Fighters – that all seek the island’s independence, hoping to create an independent Islamic state.