In one of the deadliest attacks in the southern Philippines in years, a bomb blast at a church killed at least 20 people and injured 112 on Sunday morning, 27 January. Among the dead are five soldiers who came to the rescue after the first bomb went off inside the . . . Read More
May 23, 2018 Philippines Abu Sayyaf, Bangsamoro Islamic Freedom Fighters, Catholics, Islamic extremism, Islamic State, Marawi, Maute, Mindanao, Philippines ﻿ People in the battle-scarred Southern Philippines city of Marawi are trying to rebuild their homes and lives one year after the place was stormed by Islamist militants. On 23 May 2017, militants belonging to the Maute group, an affiliate of Islamic State, took over Marawi. In what followed, five . . . Read More
March 2, 2018 Philippines Abu Sayyaf, Bangsamoro Islamic Freedom Fighters, Islamic extremism, Islamic State, Marawi, Maute, Mindanao, Philippines, Southeast Asia 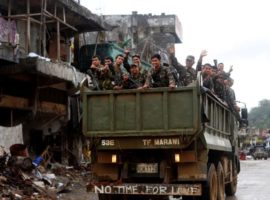 A programme launched by the Catholic Church, aimed at rebuilding the city of Marawi in the southern Philippines after months of fighting between Islamist groups and the military, has received support from the country’s largest Muslim rebel group, the Moro Islamic Liberation Front. According to AsiaNews, the rebel group is . . . Read More
September 20, 2017 Philippines Abu Sayyaf, Bangsamoro Islamic Freedom Fighters, Manila, Marawi, Maute, Mindanao, Philippines, Teresito Suganob Catholic Filipino priest Teresito “Chito” Suganob may have been freed, but the war in the southern city of Marawi is not over yet, as 40 hostages are still being held by militants in the city, while almost half a million Marawi residents are internally displaced. Father Suganob arrived in the . . . Read More
September 18, 2017 Philippines Abu Sayyaf, Bangsamoro Islamic Freedom Fighters, Islamic extremism, Marawi, Maute, Mindanao, Philippines, Rodrigo Duterte, Teresito Suganob Philippines President Rodrigo Duterte has rejected an offer by Islamic State-linked militants to exchange hostages for a safe passage out of the southern city of Marawi, which the militants have besieged since May. It is thought that Filipino priest Teresito “Chito” Suganob is being offered as part of the deal, . . . Read More
August 1, 2017 Philippines Abu Sayyaf, Islamic State, Marawi, Maute, Mindanao, Philippines, South Cotabato, Teresito Suganob A new law that will govern the creation of a new autonomous Muslim region in the southern Philippines was submitted as a bill to the government on Monday (July 17) for approval by Congress. President Rodrigo Duterte received the draft “Bangsamoro Basic Law” (BBL), crafted by a 21-member commission that . . . Read More