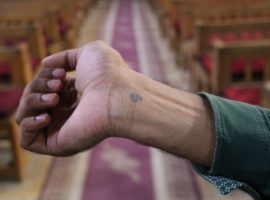 Militants belonging to the ‘State of Sinai’ group in Egypt have promised to “kill more Copts” after murdering a 27-year-old Coptic man because of the tattoo of a cross on his wrist. Bassem Herz Attalhah, also known as Haythem Shehata, was on his way home from work in El-Arish, capital . . . Read More
October 24, 2017 Egypt Copts, Egypt, El-Arish, Ismailia, Sinai, Suez

An attack on a Coptic church in north-eastern Egypt, which was also targeted during the wave of anti-Christian violence in August 2013, has been repelled by state security forces stationed outside the building. The heavy security presence outside the Mar Girgis (St. George) church in El-Arish, which had the use . . . Read More
July 13, 2017 Egypt Alexandria, Andrea Zaki, Asyut, Cairo, Copts, Egypt, Islamic State, Ismailia, Minya, Suez, Tanta, Terrorism 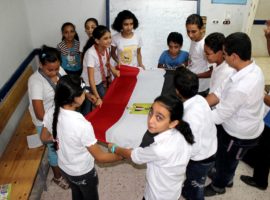 The churches of Egypt are temporarily shutting down their summer activities. “I asked all our churches and conference centres to cancel their trips and events for the next three weeks,” Dr. Andrea Zaki, president of the Protestant Churches of Egypt, told World Watch Monitor. “There is news they could be . . . Read More
March 2, 2017 Egypt Abdel Fattah el-Sisi, Bishop Angaelos, Cairo, Copts, El-Arish, Islamic State, Ismailia, Sinai, Suez 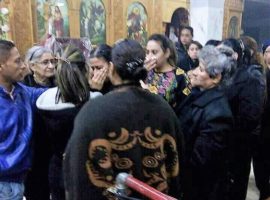 A Coptic Christian mother in North Sinai who saw her son and husband killed in front of her in their home says she then saw the gunman calmly tick off her loved ones from a hit-list he carried. In an exclusive interview with World Watch Monitor, Nabila Fawzi Hanna, 65, . . . Read More
February 28, 2017 Egypt Al-Nour Party, Copts, Egypt, El-Arish, Islamic extremism, Islamic State, Ismailia, Sinai, Suez
An ultra-conservative Islamic political party in Egypt, Al-Nour, has publicly condemned the killings of Copts in northern Sinai, saying they “go against the teaching of Islam”. The House of Fatwa, chaired by the Grand Mufti of Egypt, also condemned the murders, saying they are “sabotaging” national unity. Coptic families have . . . Read More
February 24, 2017 Egypt Cairo, Copts, Egypt, El-Arish, Islamic State, Mohamed Morsi, Sinai, Suez
Egyptian Christians are beginning to flee Sinai’s largest city, El-Arish, after yet another Copt was killed there, reports Watani. Kamel Youssef, a 40 year old plumber, yesterday (23 Feb) became the latest victim, according to AP, which said militants stormed his home and shot him dead in front of his . . . Read More
January 14, 2016 Egypt Aswan, Conscripts, Copts, Egypt, Suez 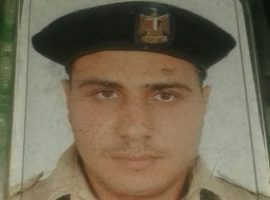 Bishoy Kamel was supposed to walk free from his military service in February. Instead, his family collected his body three months earlier. The corpse bore “signs of torture”, the family said. “When we reached the hospital that afternoon, we saw Bishoy’s body reposed like an angel,” said Natei Kamel, the . . . Read More
September 17, 2015 Egypt Conscripts, Copts, Egypt, Suez The father of an Egyptian Christian soldier found dead in his military unit 12 weeks ago is adamant, and angry. The results of an autopsy and military investigation into his son’s death are simply “not true,” he says. “I am very angry at the Suez military prosecution for refusing to . . . Read More
July 1, 2015 Egypt Conscripts, Copts, Egypt, Suez The facts are these: Bahaa Gamal Mikhail Silvanus, 23 and a conscript in the Egyptian Army, was found dead June 24 in a chair in the office of the military base where he was stationed. There were two bullet wounds in his chest, and a gun at his feet. One . . . Read More
November 10, 2014 Egypt Ansar Beit al-Maqdis, Copts, Egypt, Islamic extremism, Islamic State, Suez
Islamic State leader Abu Musab al-Maqdisi has called on jihadists to target Egypt’s Copts and judges, saying, “Targeting, pursuing and killing them is a means to serve the cause of our chaste prisoners held by the tyrants.” Egypt’s most active Islamist militant group, Ansar Beit al-Maqdis, allegedly pledged allegiance to . . . Read More