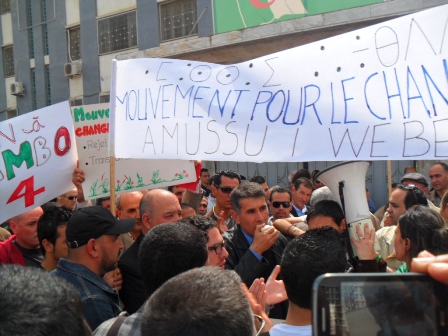 A small group of protesters pre-empts a rally planned for Algerian President Abdelaziz Bouteflika on April 5 in Bejaia.Special to World Watch Monitor

The so-called Arab Spring has seen the overthrow of several Presidents across North Africa: first in Tunisia, then Mubarak in Egypt, followed by Gaddafi in Libya and finally a second ‘overthrow’ in Egypt: of President Morsi.

However, in neighbouring Algeria, the incumbent President has stubbornly clung onto power. This despite a lively opposition movement called “Barakat!” (‘Enough!’), started a day after the announcement that the 77 year old President would now run for a fourth term.

President Abdelaziz Bouteflika has been in power since 1999, but on Thursday 17 April Algerians have the chance to vote for a new President from among six candidates.

Many feel almost insulted by Bouteflika’s candidacy: he is said to be seriously ill. They doubt his physical and mental capability to lead what (since the division of Sudan into two) has become the biggest country in Africa.

Nevertheless, most people strongly believe that the game is already decided in advance: so almost everyone expects this sitting president to be elected for his fourth term. This has led to wide-spread Indifference, even apathy amongst most Algerians – a sense of powerlessness to affect their future.

However, it is no longer a taboo to discuss this: Algerians know that presidents are appointed by the Army, the real decision maker and the true holder of power in the country. A former government official has publicly acknowledged that he himself participated and contributed to electoral fraud during the previous elections, after receiving orders from his superiors. The former official from the city of Oran, Bachir Frik, said this last week during a live broadcast of Echorouk TV, a private television channel. He said he has been “used by security and military authorities throughout his career to promote the candidate of the system.”

Nevertheless some opponents of Bouteflika are very active on social networks (Facebook) and have tried to regularly organize sit-in protests in different regions to convince Algerians to boycott the presidential election and to say “Enough!” to the current government.

In the movement trade unionists, academics, teachers, students and five opposition parties (including two Islamist movements) are united in their call for a for a boycott of these presidential elections.

The campaign, which ended on Sunday 13 April, has been marred by a few small, but nevertheless serious incidents. On Saturday 5 April, a planned election rally for Bouteflika in Bejaia in the Northern Kabyle region had to be cancelled because a few protesters, outnumbered by police, were nevertheless able to torch a part of the building where the election rally was to be held.

In the midst of this tension, many Algerian Christians call for prayer for peaceful elections.

“The first thing the church needs to do is to pray that the elections take place without violence. We must ask God for enlightenment to vote for the candidate whose program is favorable to democracy and to the Gospel” says Athman, pastor in a Protestant church in the North of Algeria. “Everyone has to decide for himself the candidate he will vote for. The church should not meddle in politics and take a position in favor of one of the candidates” he added.

The Algerian law prohibits the use of religion for political purposes.

Selma who is part of the Church choir in Bejaia hopes that the President who is elected on April 17 will give more freedom to Christians. “For me, the most important thing is that this election will be held in peace. We do not want our country to descend into violence as we saw happen in Egypt, Syria or Libya. Also, I hope that the new president will give more freedom to Christians.”

Christians often face restrictions due to a controversial 2006 law forcing churches to register with the state.

The 2006 law also outlaws any Christian evangelism of Muslims, as well as the distribution, production and storing of material used for this purpose.

None of the six candidates have mentioned the situation of the Christian minority in Algeria, which represents less than 1% of Algeria’s 38 million inhabitants.