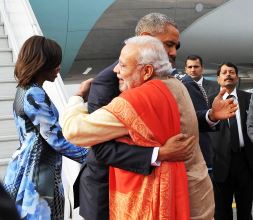 President Obama ended his visit to India with a speech referring to religious freedom which has been interpreted as an attack on Prime Minister Narendra Modi’s treatment of minority faiths, although Modi was not mentioned by name.

The American President warned India not to stray from its constitutional commitment to allow people to freely “profess, practice and propagate” religion.

Obama’s visit aimed to cement a strategic partnership with India, and the two leaders gave the media plenty of opportunity to see them developing a stronger relationship. The President chose his parting speech to deliver his message to the nation about treatment of non-Hindu faiths.

Click here to listen to President Obama speaking about religious freedoms in his parting speech.

Quoting Mahatma Gandhi, Obama said that Buddhism, Christianity, Hinduism, Islam and Sikhism are  “all different flowers in the garden…India will succeed so long as it is not splintered along the lines of religious faith”.

Since Modi’s Bharatiya Janata Party (BJP) swept to power in 2014, Hindu activists have been eager to declare their country a nation of Hindus, which has led to an increasing number of attacks on minority faiths.

In a move to respond to these attacks, shortly before the Presidential visit Indian Christians from across denominations formed a legal-aid agency, complete with a telephone hotline number.

The United Christian Forum for Human Rights was formed Jan. 19 “to co-ordinate both legal and advocacy assistance to the community, which has been traumatized in recent months by communal violence in several states,” said John Dayal, a prominent Christian activist and spokesperson for the new group, in a statement to World Watch Monitor.

Asked before the American presidential visit whether the flurry of anti-Christian violence would figure on Obama’s agenda, the new Forum Secretary Rev Vijayesh Lal said: “We have to speak up for ourselves.”

Four days before the US President arrived, the Catholic Church urged the government “to uphold the secular character of India.” This plea emerged from a meeting of India’s top Catholic Church leadership.

The Catholic Bishops’ Conference said that recent attacks on Christians, the clamour to turn India into a Hindu nation and attacks on churches and Christians in several parts of the country have “shaken the faith in the secular fabric of the nation.”

“The UCF has commissioned a 24-hour National Helpline, 1-800-208-4545, so that lawyers and experts can assist victims of violence, intimidation, coercion and illegal confinement by any criminal or political group,” the organizers said in the statement.

“We have had more than 4,000 calls already. Most of them are out of eagerness to verify if it is working and also to express solidarity,” said Tehmina Arora, a lawyer with the Alliance for Defending Freedom India.

But already, three serious cases of atrocities have been reported, Arora said. These include a dozen Christian families being ostracized near Kanyakumari, in the peninsular southern tip of India; Christians being prevented from building a church in western Gujarat state; and intimidation of Christians in eastern Bihar state.

“We are verifying these complaints and Christian lawyers in the area will be asked to help them,” Arora said.

United Christian Forum coordinator A C Michael said the new forum will be “more of an action group.” Christian networks such as the Evangelical Fellowship of India, the Christian Lawyers’ Association and the Alliance for Defending Freedom India will be involved in providing timely legal support for needy Christians.

“Church leadership will not be involved in it,” Michael said. “The Helpline and the Forum will be a watch group to monitor the developments affecting the community.”

So far in 2015, at least one violent incident against Christians has been reported each week, according to speakoutagainsthate.org, a website that monitors violence and other attacks on Christian religious freedom.

In December, the National Human Rights Commission of India issued notices to five states – the north-central states of Madhya Pradesh and Chhattisgarh, and the southern states of Kerala, Karnataka and Tamil Nadu — citing media reports of acts of violence and atrocities against Christians, according to The Times of India.

“These frequent attacks on the religious institutions of the minority community, if true, violate the fundamental right to freedom of religion and cause immense harm to the social fabric,” a Commission statement said.

The attacks on minorities, including Christians, also led to a debate in the parliament on “rising communal incidents in the country,” according to NDTV, a private news channel.

“2014 has been a … traumatic year… A campaign based on hate ends the year in decisions based on hate,” Dayal said at the launch of the new forum, alluding to the election campaign of the BJP and its victory.

In 2014, the EFI monitored at least 144 such cases, but said the actual number is likely to be much higher.

While Christians, churches and their institutions are being attacked in Delhi and various state capitals, cases in smaller cities and villages often go unreported, and victims have little help.

“The United Christian Forum has come together so that we are able to ensure that the voice of the persons in the villages … reaches New Delhi,” forum Chairman Michael William announced at the function.

“The United Christian Forum is about a collective response from our community,” said Secretary Rev Vijayesh Lal. “What UCF stands for … is that we care, that we are here, we are together and we are one body.”

The BJP is widely seen as the political wing of the Rashtriya Swayamsevak Sangh, an umbrella Hindu nationalist group which champions the concept of Hindutva, an ideology that envisions a Hindu India where minorities are allowed to exist, but in subordination to the majority.

Dayal said Christians live under pressure in India no matter who is at the helm of the government.

The new Christian Forum and hotline have been assembled just as India hosts U.S. President Barak Obama. Asked whether the flurry of anti-Christian violence would figure into Obama’s agenda, Lal said: “We have to speak up for ourselves.”

Four days before the president arrived, the Catholic Church issued a statement urging the government “to uphold the secular character of India.” This plea emerged from a meeting of India’s top Catholic church leadership including the four Cardinals in the Indian Church.

The Catholic Bishops’ Conference said that recent attacks on Christians, the clamour to turn India into a Hindu nation and attacks on churches and Christians in several parts of the country have “shaken the faith in the secular fabric of the nation.”

Pramod Singh, President of the Christian Legal Association of India and part of the new United Christian Forum, said the idea of India, as “conceived by our founding fathers,” is under threat.

He read the preamble to the Constitution before the audience: “We, the people of India, having solemnly resolved to constitute India into a sovereign socialist secular democratic republic, and to secure to all its citizens: justice, social, economic and political; liberty of thought, expression, belief, faith and worship; equality of status and of opportunity; and to promote among them all fraternity assuring the dignity of the individual and the unity and integrity of the Nation.”

John Dayal said Christians should meet the challenge in prayer “on bended knees.”

“But bended before God,” he stressed. “Not bended before man and not bended before non-state actors or (the) state itself. India is our motherland, and we claim our rights as children of God and citizens of India with the Bible in one hand and the Constitution of India in the other.”