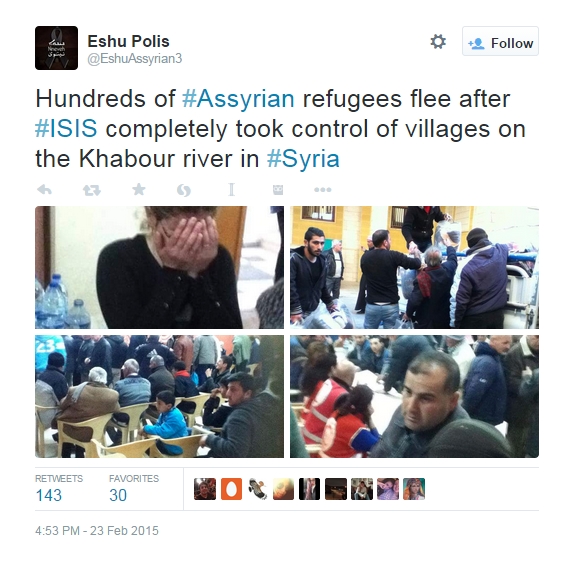 Militants of the self-proclaimed Islamic State launched a fierce offensive before dawn Feb. 23, targeting 35 Assyrian Christian villages in the northeast corner of Syria.

The surprise attacks along a 40-kilometer stretch of the Khabour River in Hassaka province forced some 3,000 Christians to flee their homes.  A teenage Christian boy and four Assyrian militia fighters were reported killed in the first day of fighting, and dozens of Assyrian men, women and children were reported to be held hostage. 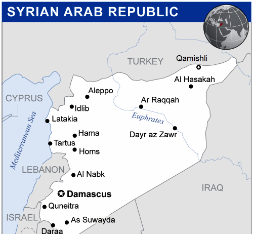 IS militants seized an unconfirmed number of Christians from at least 100 Assyrian families in the attacks, according to a Christian source in Hassaka city who spoke on the morning of Feb. 24 with Archimandrite Emanuel Youkhana, of the Assyrian Church of the East.

The hostages were taken prisoner in Tel Shamiran, Tel Goran, Tel Jezirah and Tel Hormizd. In these four villages, the source said, the IS militants separated the captured men from their families, leaving the women and children under guard in their homes.

In light of the IS militants’ “barbaric record with the captured,” Youkhana said, “the destiny of these families is a major concern to us.” It was confirmed to him that one young man, a 17-year-old named Milad Adam, had been killed in the attacks.

According to the online Rudaw English news group, wireless conversations between IS jihadists were overheard claiming that “56 crusaders” had been taken prisoner from one Christian village. The Syrian Observatory for Human Rights reported “at least 90” Assyrians had been captured.

In an otherwise unconfirmed claim, Newsweek reports that IS has demanded a prisoner exchange with the Kurdish forces: “They are seeking the release of ISIS members in exchange for the villagers. The exact number of prisoners ISIS is looking to swap for is not known. They have threatened the lives of the village men, estimated to be more than 100, if the swap does not go through.”

By nightfall Feb. 23, Youkhana said, more than 600 Christian Assyrian families had fled to Hassaka and Qamishli, two of Syria’s 10 largest cities. Although nearby Sunni Arab villages “in general” supported the IS takeover, his source said, some Sunni Arabs near Qabr Shamya intervened to rescue 15 trapped Assyrians, guiding them to safety in Hassaka city.

According to Mar Aprem Nathniel, Bishop of Syria of the Assyrian Church of the East, St. Mary’s Church in Hassaka was “overloaded with the people” on the evening of Feb. 23, until most were dispersed to local Christian homes in the city.

As fighting intensified Feb. 23 for control of Tel Tamar and other villages, the limited Assyrian Christian militia forces were bolstered by a contingent of Syrian Kurdish fighters from the Democratic Union Party, along with air strikes by the Syrian army.

According to Hassake sources, the IS forces failed to advance. “We hope IS will be defeated in the next days,” Youkhana said, noting that the Khabour River has served as a natural defense line for the Christian villages.

According to unconfirmed reports, churches in Tel Hormizd and Tel Shamiram have been set on fire.

On Feb. 1, IS jihadists had ordered Christians in the Hassaka region to remove the crosses from their churches and be prepared to pay a jizya tax. A similar demand had been posted online a year ago by IS, demanding similar requirements from Christians in the Syrian city of Raqqa, which IS seized last year and proclaimed to be its capital.

Khabour’s Assyrian Christians had resettled in Syria after 1933, fleeing the Kingdom of Iraq’s Simele massacre, which targeted ethnic Assyrians. Before the Syrian civil war began four years ago, they numbered about 400,000, about 5 percent of the national population.

Hassaka city is just 55 kilometers from the province’s eastern border with Iraq. The province is particularly strategic for the coalition fighting IS, situated at a pivotal point bordering Turkey as well as the Iraqi regions under the jihadists’ control.