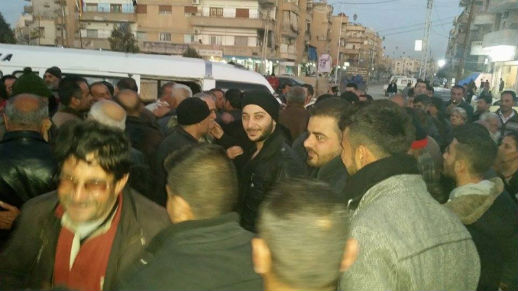 Assyrians from Tel Goran village, abducted by Islamic State kidnappers in late February, were released and returned safely in Hassaka on March 2.Photo provided by CAPNI

Ten days after the self-proclaimed Islamic State’s harsh offensive emptied out a cluster of Assyrian Christian villages in northeast Syria, the extremists’ intentions toward their 220 or more Christian hostages remain unclear.

According to the Syrian Observatory for Human Rights, an Assyrian commander said IS extremists released 29 of their Christian hostages on March 1, citing a so-called “Sharia court decision” to set them free. But the first group of released captives to reach safety in Hassaka city on March 2 numbered only 19.

All in their 50s or older, the 19 former captives included 17 men and two women. All were civilians from Tel Goran village, except for one hostage believed to have been captured by IS a month earlier. Local Sunni Arab leaders reportedly helped negotiate for the release of the Tel Goran hostages.

“We did not believe that we would come out alive,” one of the released Christians later told the Assyrian International News Agency. “We were in constant fear.”

On March 3, four more hostages, including a six-year-old girl named Mariana and her great aunt, were released and welcomed to Hassaka by crowds of relieved Assyrians. Although the militants ordered the release of Mariana’s father in the first group of captives, they demanded he return to pay a ransom before they would set his daughter free. The other two released Assyrians were from a separate village, Tel Shamiran. 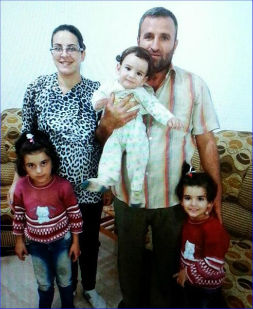 A family reunited after Assyrians abducted from
Tel Goran village were released in Hassaka on
March 2.Photo provided by CAPNI

According to one of the released Tel Goran hostages who spoke by telephone with AINA, everyone in the small village was awakened, rounded up and kept under guard during the initial three hours of fighting in the early hours of Feb. 23. The 17 men and four women were driven to Mt. Abdul Aziz for the first night, and then the next morning driven north another four hours into the mountains.

For the next five days, he said, “They kept pressuring us to convert to Islam. It was their constant focus. But we were not mistreated.” When the Christians refused to convert, they were told they must then pay the jizya “tax” for not becoming Muslims.

“We said we would pay the jizya, but we would not convert.” Later, their captors said they would not collect the jizra, since villagers had not fought against them. But the condition of their release, the IS fighters said, was that the Christians could not return to their village.

“They said if we returned and they captured us again, they would kill us. They would behead the men and enslave the women.”

The Associated Press, citing the Assyrian Network for Human Rights in Syria, has reported that the extremists could be positioning their captives as human shields from coalition air attacks against Shadadi town, 40 miles south of Hassaka. News reports also have cited relatives of hostages saying IS fighters answering the mobile phones of their hostages have suggested they wanted prisoner swaps with the Kurdish forces, who have captured IS fighters.

Violent clashes are continuing between IS militants and the Kurdish and Assyrian forces trying to drive them from the Khabour region of Hassaka province. In one significant victory on Feb. 27, Kurdish fighters pushed the IS militants out of Tel Hamees, a strategic stronghold near the Syria-Iraq border which the jihadists had held for nearly a year.

Unconfirmed reports indicate at least nine members of the Assyrian Christian militia “Sutoro” have died in the Khabour area fighting, with another 12 to 15 of their fighters, including two women, reportedly executed by the militants.

Khabour River is now controlled by IS,” said Rev. Emanuel Youkhana, head of the Christian Aid Program in Northern Iraq. “The northern part is controlled by Assyrian and Kurdish fighters,” and the area’s 3,000 Christians have all evacuated their homes now and fled to Hassaka and Qamishli, he said.

Already some 40 displaced Assyrian Christians have fled across the Lebanese border, where they began arriving on March 2.

Lebanese Parliament member Michel Aoun spoke out strongly in support of the special one-week visas being granted to the displaced Assyrians, declaring at a press conference March 3: “We do not want [Christians] to take refuge in Europe or anywhere else. It is a crime to treat in that way the people who have lived in the Levant for centuries.”

“Khabour is empty now,” the Tel Goran hostage told AINA from Hassaka city. “There are no Assyrian civilians left in the entire area. Everyone is making plans to leave.”

Church leaders in Hassaka province are caught in a “sensitive situation” concerning the several hundred remaining Christian hostages, Rev. Emanuel told World Watch Monitor from Dohuk, in northern Iraq. “We are focusing on the life-saving and safe release of these people. Our bishop and church in Hassaka are doing their best.”

Just days after the IS attacks began, the Syrian Catholic Archbishop of Hassaka-Nisibi, Jacques Behnan Hindo, accused Turkey over Vatican Radio of preventing Assyrian Christians trapped in Hassaka and Qamishli from fleeing across the nearby Turkish border to safety.

“A big trench was dug on the Turkish side of the border, in an effort to prevent crossing in either direction,” wrote Turkish journalist Cengiz Aktar in a March 4 column in Today’s Zaman newspaper. “Thus, the Syriacs cannot flee to Turkey, and Turkey cannot send aid.”

“The Turkish government refrained from condemning the ISIL attacks on Syriacs [Assyrians], as it did during the attacks on Sinjar (against Yezidis) and Kobani (a militarily strategic Syrian Kurdish city),” he continued. “Some argue that the government indirectly supports these attacks by opening the dam shutters of the Khabour River, putting Syriacs in a difficult position.”

“As for Turkish media outlets,” Aktar observed, “they as usual are disinterested in the Syriacs’ plight.”