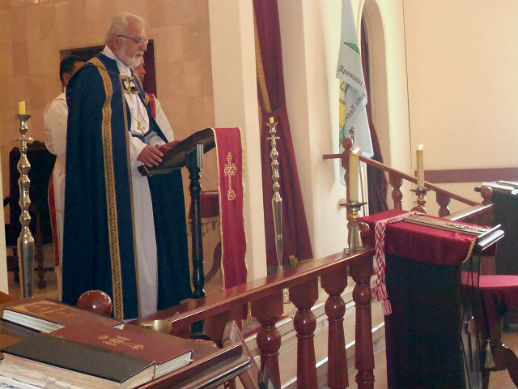 Archimandrite Emanuel Youkhana
leads prayers for the Hassaka, Syria Christians at a mass in the Assyrian Church of the East in Beirut on March 22, 2015.World Watch Monitor

“We are going through a terrible moment,” Syriac Catholic Archbishop Jacques Behnan Hindo told Fides News April 30. “The jihadists of the Islamic State attacked Hassaka for two days. They were warded off by the [Syrian] army and Kurdish militias. But we are cut off, like an island surrounded by jihadists from all sides.” 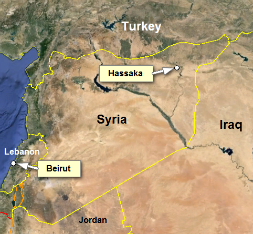 Some 1,000 Assyrian families had been forced out of their village homes along the Khabur River by the Islamic State in late February, sending them into exile in Qamishli and Hassaka city.

In addition, 242 Assyrian Christians captured during the attacks are still being held incommunicado, reportedly at al-Shaddadi, an IS stronghold bombed last week by the Syrian army. Church officials have identified all 93 women, 51 children and 98 men taken captive.

But after two months of behind-the-scenes negotiations through local intermediaries, church attempts to gain the release of the hostages were rebuffed by their IS captors.

According to Australia’s Archbishop Mar Meelis of the Assyrian Church of the East, who spoke to Newsweek on May 1, the IS jihadists demanded a ransom of US $23 million, or about $100,000 per person, to release their Khabur captives. The militants reportedly described the ransom as the jizya – a payment required under Islamic law for non-Muslims who refuse to convert to Islam.

In response, an Assyrian church leader told World Watch Monitor, “This is an amount beyond the capacity of a tiny church and community. These captives are poor people who depended on their low income as farmers.” The church’s counter-offer, which the cleric said was “a reasonable amount that the families can afford,” was rejected, leaving negotiations at a standstill.

Back on March 23, an IS video was released showing one of the Assyrian hostages reciting the Muslim shahada, or statement of faith, and declaring that he had voluntarily converted to Islam “without any pressure.”

“Yes, this man named Sargon became a Muslim for a few hours to save his life and get released,” an Assyrian cleric told World Watch Monitor. “He is now back in Qamishli, where his behavior is being discussed. So this is the reality of what he did.”

As hard-fought land battles continued during March and April, dozens of the displaced Assyrian families began fleeing Hassaka to resettle abroad. At least 300 families have arrived in Beirut, where the Lebanese government has agreed to grant six-month visas to Assyrian Christians from Hassaka who apply through the church. Others escaped to refugee camps across the Iraqi border near Dohuk.

“Assyrian Christians are facing a danger that threatens their existence in their historical regions,” Youkhana told the European Parliament Subcommittee on Human Rights in Brussels on April 23.

Not only is Hassaka under the control of armed Islamist groups, he said, but Assyrians are being manipulated by the Assad regime, which presents itself as the only alternative to protect Syria’s threatened religious minorities. As an ancient Eastern-rite church, Assyrian Christians are linked ethnically with the Syriac and Chaldean Christians of Turkey and Iraq.

Heavy fighting in early May continued to revolve around the strategic town of Tel Tamar, where hard-pressed Kurdish and Assyrian Christian militiamen are outnumbered and poorly armed. “We are surrounded from three sides,” a militia sniper poised on a hilltop overlooking Tel Tamar told a Deutsche Welle reporter on May 5. “If IS wants to push into the town, they will probably be able to take it.”

The future of Hassaka’s Christians became increasingly precarious after Syria’s revolution took an overt Islamist turn in 2013, once the Assad regime had pulled most of its army forces out of northeastern Syria. Jabhat al-Nusra, an Al-Qaeda affiliate, took the initial lead among a host of rival Islamist rebel groups vying to control Hassaka, only to be sidelined by Islamic State forces dominating the province by July 2014.

An Assyrian doctor working in a government hospital in Qamishli told World Watch Monitor in late March that it was impossible to trust any of the sides fighting for control of Hassaka province. “I don’t trust any of them. There is clear coordination between them. They are all in contact with each other. And who wins? The weapons industry,” he said.

In Beirut, Bishop Yatron Koliana of the Assyrian Church of the East sadly agreed. “We are fasting and praying that the governments of the world will not give weapons or facilitate things for the Islamic State and their allies,” he told World Watch Monitor. “Sometimes we feel that Christians here are being sold for oil and gas. So we plead for prayers, that the big decision-makers will have mercy in their hearts to save us.”

“Any of the sides fighting here could stop it,” the doctor said. “But they don’t want to – they want to empty out all the Christians from here. Turkey has its fingers here, too. Without the Christians here, it will become like Afghanistan.”