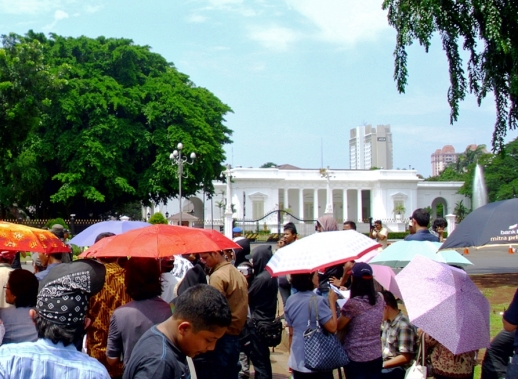 At the heart of the world’s most populous Muslim-majority nation, in the megacity of Jakarta, Indonesia, a church this Sunday will hold its 100th open-air Sunday morning service next to a main road – because a city mayor is afraid to insist that a Supreme Court order is carried out.

Bogor City, 60 kilometres south of the Indonesian capital Jakarta, is said to be one of the world’s most densely populated areas. In April 2010, Bogor’s Taman Yasmin Indonesia Christian Church (GKI Yasmin) was sealed and padlocked by order of the mayor of Bogor and the city government. According to a national paper, he claimed that the previous sub-village head had falsified community signatures and that the church brought trouble with local Muslim neighbours. Later he said that the church should not be built on a street with an Islamic name.

GKI Yasmin’s congregation resorted to conducting services on the pavement in front of their former church for more than two years. During services outside the church, they constantly faced harassment from groups of protesters – including from Islamist extremist groups such as FORKAMI (Indonesian Muslim Communication Forum), GARIS (Reformed Islamic Movement) and the FPI (Islamic Defenders’ Front).

Fearing further aggravation from hard-liners, members of the Protestant church then held clandestine services at the houses of congregation members. In 2012, they started to conduct Sunday services in front of the State Palace, to further their case with the government.

The Bogor City Government reportedly allocated land for the replacement church some seven kilometers from its previous location, and a budget of up to 4.5 billion rupiahs ($305,000) for a new church. The West Java regional government said it could provide up to 10 billion. But it is by no means certain that, even should the church agree to relocation, which so far they utterly refuse to do, they would be allowed to build a new church. Among other things, they would have to obtain a new building permit, which would require them to obtain approval signatures from 60 local residents and 90 of the church congregation itself (all proved by local ID cards).

Indonesian President Jokowi, who completes one year in office in October, has introduced some improvements for the country’s minority faiths, but a case like this one still shows how much room there is for progress. A recent report says he has the power to enforce the highest court’s order on Bogor, but so far he has taken no action. The report continues, “As Human Rights Watch noted, Jokowi has also sought to “outsource a solution to Indonesia’s religious intolerance problem to NU and Muhammadiyah, [Indonesia’s two largest Muslim organizations].” While they both promote tolerant versions of Islam, the report says “some of the growth of extremism, which has many facets, can be dealt with only with the power of the state”.

For World Watch Monitor, Vishal Arora went to visit the Sunday morning service outside the Presidential Palace. His video report is here:

Text of video:
“I’m worshipping here in front of our presidential palace because the GKI Yasmin church in Bogor cannot worship [in its own building] on Sundays,” said Adhi Nugroho Chandra, a member of the church, which was sealed off in 2008.

The GKI Yasmin church has been meeting outside the president’s office in Jakarta since 2012. This month, it will hold its 100th worship service on the street. It holds them every two weeks at 1pm, come searing heat or torrential downpour: the two or three other Sundays it meets in a variety of  places. Its building in Bogor city, in Jakarta’s suburbs, remains sealed in defiance of a Supreme Court order. The mayor of Bogor is under pressure from Islamist groups to restrict the congregation from using their place of worship.

“It’s very hard to be a minority in Indonesia, and we have to fight for our rights,” said Dwiati Novita Rini, a lay leader of the church. “It’s not easy but it will not affect my faith.”

While they are holding on to their faith in God, church members are now beginning to lose their confidence in the influence of President Jokowi, who will complete one year in office in October.

“I think the problem remains because the president did not dare to take action,” Chandra Juliar, the pastor of the church, said. “The leader should have the courage to take action and enforce the law. We can’t afford, as a nation, to let this problem remain if we want peace in Indonesia.”

President Jokowi was expected not to repeat the mistakes of his predecessor, Susilo Bambang Yodhoyono, who was criticised for being indecisive and weak before Islamist extremists. Jokowi appears to have the will to enforce the court order, but that involves taking a political risk. To function as president, he needs cooperation from parliament, which is dominated by opposition parties, including Islamist groups. Going against the Bogor mayor could have political repercussions.

“The mayor, who, I think, is the key person who can decide what happens in Bogor, still has people around him who are intolerant,” explained Rini.

Christians acknowledge that President Jokowi has brought at least some change in the religious atmosphere of the country. For example, extremist groups like FPI and GARIS now appear to be less active.

“In Bogor, the leader of the group GARIS, which protested against our church, is in jail, and the protests against us are now getting lower and lower,” Rini said.

The GKI Yasmin church says it will continue to hold as many worship services on the street as it takes to regain their right to use their church building.

“We are often asked how long we will struggle,” said Pastor Juliar. “We have to carry on until we get justice. Yes, we are very tired and our hope at times starts to fade, but as believers, we won’t give up. Our struggle is not only for our needs, but also for others who deserve peace. So we will achieve our goal to build our beloved Indonesia to be a peaceful country.”

Meanwhile, Aceh – the only Indonesian province enforcing sharia law – is among the most hostile places for Christians to live. On 18 August, for the third time in 30 years, the Pakpak Dairi Christian Protestant Church (GKPPD), in Singkil regency, was burned down in a fire that reduced the building to ashes in only 20 minutes.

A police investigation discovered a traditional machete and the wheel traces of two vehicles at the site. Despite this evidence, they announced a few days later that the fire was presumably caused by a short circuit, stopping further enquiry.

Fear of upsetting the majority community is believed to be another factor: after an arson attempt at the church in 1999, a mob threatened to set fire to the police station if arrested suspects were not set free. The demand was immediately granted.

Three hundred and fifty church members now hold services in the church yard. They gathered funds, bought a tent, and set it up for Sunday services.

“We know we are being watched by the extremists. Some even threatened to destroy the tent,” the leader of GKPPD in Singkil, Rev. Erde Brutu, says. “But I remind the congregation: ‘Don’t give in to the temptation of fighting back. If we retaliate, how are we different from those who trespass against us?'”

Rev. Erde says he is almost desperate over the repeated incidents: “Pray that God will touch the perpetrators’ hearts and turn them to Him, as well as for the law to be enforced in other similar cases in my hometown.”

Indonesia ranks #47 on the 2015 World Watch List, the annual list compiled by Open Doors International, which works among Christians under pressure for their faith.