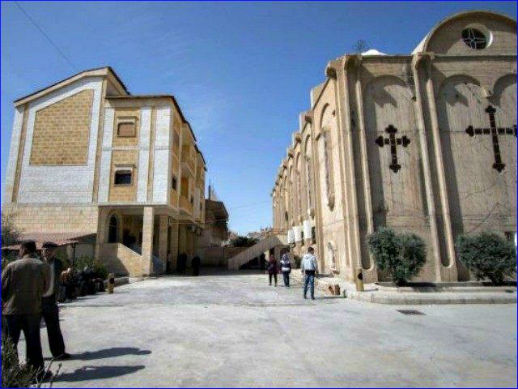 Efforts are being rallied to save one of the last remaining centres of indigenous Christian presence in the Levant against a renewed jihadi attack.

Militants of the theologically-based “Islamic State” have come within 3 kilometres of the Syriac Orthodox town of Sadad in western Syria, the Assyrian International News Agency reported Thursday, 12 Nov.

“We are afraid that ISIS will conquer the town, which God will hopefully prevent. We would lose the centre of Christianity in our diocese,” the Syrian Orthodox archbishop of Homs, Selwanos Boutros Alnemeh, told the Catholic charity Aid to the Church in Need earlier in the week.

Faced with the prospect of another irreplaceable loss, different anti-Islamist factions have teamed up to defend the town, albeit for different reasons.

Sadad’s strategic location, 60 kilometres southeast of Syrian government-held Homs but close to the Damascus-Homs main highway, makes the town a prize for both IS to win and Assad to keep.

Sadad is one town where remnants of the language of Christ is still spoken. The Bible is said to refer to it as Zedad, or mountainside, in both the books of Numbers and Ezekiel.

The town has been under siege by IS for well over a week, Mor Ignatius Aphrem II, head of the Syriac Orthodox Church, earlier told Newsweek.

He added that more than 500 Christian fighters, joined by pro-government fighters, have travelled from across Syria to prevent the town’s fall.

IS launched an offensive against Syria’s ancient Assyrian Christian heartlands on 31 Oct. as it continues its push west towards Damascus.

In a surprise attack three weeks ago, IS took the town of Mahin, 10 kilometres east of Sadad, from government forces and ultimately advanced to a mountain about 3 kilometres southeast of Sadad itself, AINA said.

Since August, thousands of civilians have been displaced by a combination of IS advances and increased aerial and ground bombardment by Russian and Syrian government forces trying to stave off the militants, the Syrian Network for Human Rights reported.

Out of 15,000 original residents, only hundreds are left in the town, understood to be mainly defenders.

Most of those who fled Sadad travelled to towns with sizeable Christian populations, such as Fairouzeh and Zaidal east of Homs city.

In October 2013, Sadad was briefly taken by Islamic fighters from Jabhat al-Nusra. Before being forced to leave, the jihadists killed at least 45 Christians, pillaging churches and houses.

Recalling the unexpected attack two years ago, Archbishop Boutros Alnemeh told World Watch Monitor, “Not so many people managed to escape. The town was taken at night while the inhabitants were asleep.”

“Among those martyred were a family of six. They (the militants) dragged them from their home. They were taken to a nearby well, where they pushed their heads down the mouth of it. They shot them one by one to the head and let their bodies fall to the bottom,” Alnemeh said.

The victims included an elderly father and mother, in their eighties and nineties, a daughter, her two children and her mother-in-law.

“The jihadists want to capture Sadad because it is a Christian town,” the Archbishop’s assistant, Rev.  Luka Awad, said.

“When IS militants invaded Qaryatain, they threatened they would kill all the Christians in Sadad,” he was quoted as saying by Middle East Christian News.

Qaryatain, another Syrian town with a large Syriac Christian population in Homs province, fell to IS in August. Hundreds of Christians, both Syriac Orthodox and Syriac Catholic, were taken captive. They were later released after being forced to pay jizya (Islamic protection money) and sign a dhimma (Sharia restrictive contract) to avoid death.

“The people of Sadad began to leave after IS took al-Qaryatain,” Osama Edward, a member of the Assyrian Human Rights Network told Syria Direct, a news project comprising Syrian and Western reporters.

Later in the month, the IS bulldozed the historic 5th-Century Syriac monastery of Mor (St.) Eliane the Hermit.

Earlier this year, on 23 Feb., jihadists drove out 3,000 Assyrian Christians from their homes when they overran 35 of their villages on the Khabour River in Hassaka, at the opposite end of the country in north-eastern Syria.

An estimated 168 Christians are still captives of the IS, after the jihadists, on camera, shot three dead and threatened to kill more if demands for a hefty ransom were not met.

The last stronghold in Iraq

“The people in Sadad and all those that joined them, many Christians from all over Syria, showed that they have had it with ISIS turning Christians into slaves.”

–Nuri Kino, founder, A Demand for Action, quoted by Newsweek

Further east, across the border in Iraq, IS militants drove into the Nineveh Plains in August 2014, north and east of Iraq’s second largest city of Mosul, sending 200,000 indigenous Assyrians on the run.

“August 7 is Assyrian Martyrs’ Day. It is commemorated worldwide by Assyrians to remember their fallen, including the 3,000 who were killed by the Iraqi army in Iraq between August 7 and 11, 1933,” said Peter BetBasoo, founder of the Assyrian International News Agency.

The Nineveh Plains were the last stronghold of Assyrians in Iraq.

Having escaped 1,400 years of persecution “by Muslims, Arabs, Turks, Kurds and Iranians, the events of the past year have caused a fundamental psychological transformation of most of the Assyrian population,” BetBasso said.

“The low-grade genocide since 2004 and the wanton destruction by ISIS in the last year in Iraq and Syria have caused most Assyrians to see the writing on the wall, and to acknowledge, consciously and subconsciously, that it is time to leave their birth land.”

The jihadists, including IS militants, have invariably left a trail of destruction behind them, including destroyed ancient churches, monasteries, and shattered native communities.

It is this “wanton” treatment of Christian minorities elsewhere in the Middle East that is motivating Christian fighters to prevent another tragedy in Sadad, said Nuri Kino, founder of the Middle Eastern advocacy group A Demand for Action.

“We hope that Sadad does not become a new Mosul, Nineveh, Khabour or al-Qaryatain,” Kino told Newsweek. “The people in Sadad and all those that joined them, many Christians from all over Syria, showed that they have had it with ISIS turning Christians into slaves.”

(Note: Kino has been a contributor to World Watch Monitor).

Sadad is a centre of heritage for Syria’s Christian minority, which made up approximately 10 percent of the country’s pre-war population. It is home to several churches, including the Syriac Orthodox Church of St. Theodore and the Church of Mar Sarkis, which holds a number of rare 18th-Century Christian wall paintings.

The Syriac Orthodox Church traditionally has had between 1.5 million and 2 million followers spread throughout Syria, Iraq, Lebanon and southern Turkey. Yet, like other native Middle East communities, more are increasingly living in a Western diaspora than remaining in their now-hostile cradle lands.

This year marks a century since what has become known among Assyrians/Syriacs as the Sayf, or Sword, – the mass killings of their populations by Ottomans during World War I, in conjunction with the Armenian and Greek genocides.

Speaking of Sadad, Rev. Awad said, “It is in every sense a centre of Christian heritage whose loss is unthinkable!”

“We plead with the international community to put an end to this war. Our people have been the victim of a genocide a hundred years ago in 1915,” he said. “We do not need another genocide in the 21st Century.”