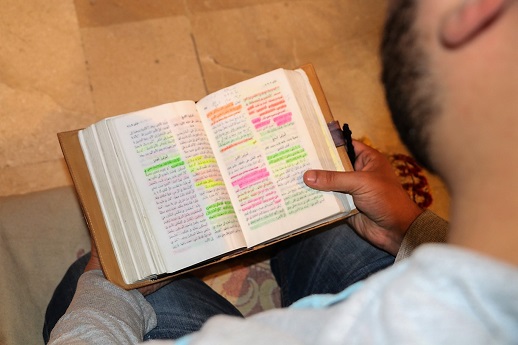 Meghrik was
kidnapped and tortured by Islamic State before his release. Photo: December 2016.World Watch Monitor

Meghrik* was on a bus when it happened.

He was travelling from Aleppo to Al-Qamishli in the north east of Syria, a seven-hour journey even before the war started. Now war means there are many checkpoints to stall progress on the 430km trip.

After a few hours, they approached yet another checkpoint. Drawing closer, the travellers could see the black and white flag of Islamic State (IS) blowing in the breeze. In the distance they could just see the city of Raqqa, where IS still has its Syrian headquarters.

The driver slowed down and stopped when an IS fighter, dressed all in black, raised his hand.

Three fighters got on. Meghrik, sitting at the back, watched as they began checking other passengers’ IDs. He started to sweat and took a deep breath to calm himself down.

A fighter stopped next to him. “Are you a Christian?” he asked.

Meghrik answered “no”. He was raised by Christian parents and the family name was on his ID card, but he didn’t believe in God anymore; he thought Christianity was ridiculous.

“You’re lying. Your name says you’re a Christian. Come with me,” the fighter said.

He was paralysed by fear. Being kidnapped by IS was a worst-case scenario in the minds of most Middle Eastern Christians. Torture, sadism, death threats and pressure to deny Christ are some of the things the imprisoned might face. But the soldier appeared reasonable despite the reputation of IS.

Meghrik left the bus, taking a small bag with him. As he passed the other passengers, he noticed the horror and fear on their faces.

The soldier showed Meghrik’s ID to the commander at the checkpoint, who said: “An infidel. You cannot continue your journey.” Meghrik tried to speak but was ordered to shut his mouth.

Sent to a house in Raqaa, later in the day he sat in a mocked-up courtroom facing an IS judge, who looked at his ID and concluded that he was a Christian.

As Meghrik heard the words, he felt like he was in a nightmare.

“It cannot be true,” he told himself.

He felt the strength leave his body, replaced by fear.

“But I am not a Christian, I don’t believe what my parents taught me,” he told the judge in a whisper.

“This is the verdict,” the judge replied.

Meghrik was thrown into a room that served as his prison cell. Fear kept him awake and he hoped that it was all a big misunderstanding.

Later, men in black clothes took him to be executed. They tied his arms, covered his eyes and pushed him into a car. After driving through the city they arrived at an open area. There were graves already dug for those sentenced to death.

They took off Meghrik’s blindfold and he looked into the hole with horror. They pushed him in and then he heard the men loading their weapons. Tears ran down his cheeks and he felt completely helpless.

Seconds passed but there was no shot. Then one of the soldiers broke the silence.

“You can live if you convert to Islam,” he shouted.

“I will convert,” replied Meghrik, seeing no other way out.

The men took him out of the hole and back to the room where he was imprisoned. He felt relieved but still fearful, especially when another man in the room with him said: “Converting is of no use. They kill you anyway”.

The next day IS soldiers took him to be interrogated and tortured. They gave him 30 lashes from a length of cable; this treatment went on for two more days.

On the fourth day he faced a new accusation. “We checked your mobile phone. You insulted the Prophet,” said one of the men. “Tomorrow we will kill you. You will go with a car bomb or we will slaughter you in another way,” another man added.

Fortunately for Meghrik, that never happened. One of the IS leaders visited and told him he would be taken to another place and not executed.

He was taken to another IS judge who told him he would soon be free.

Ten days after he was kidnapped Meghrik walked out of the IS prison holding a document that gave him the right to pass through IS checkpoints and return home to his parents.

Asked why he felt he wasn’t killed, Meghrik says it was an answer to prayer, even though he hadn’t felt able to accept the existence of God.

“The moment they threw me in the hole to kill me, I said to God, ‘If you exist, please give me a chance to get to know you.'” He continued to pray for his release even though he was later forced to convert to Islam and then tortured. “God changed the heart of the judge and he set me free,” he said.