Church leaders in the central Indian state of Madhya Pradesh have deplored an attack on a Catholic hospital, the premises of which was vandalised and bulldozed by a mob led by the personal assistant of a Member of Parliament, representing the ruling BJP.

“Police have filed a case today [14 March] – 48 hours after the attack took place. What happened here is a shocking display of muscle and political power,” Bishop Sebastian Vadakkel, of the affected diocese in the city of Ujjain, told World Watch Monitor.

“We desperately contacted the police chief, district collector and met even the state Governor [who was in Ujjain on the day] but none of them did anything,” he added.

The attack on the Pushpa Mission Hospital, in the heart of Ujjain city, was carried out on the morning of 12 March by a mob led by Gagan Singh, personal secretary of BJP MP Chintamani Malviya, claiming they had a court order to “reclaim” a piece of land on the roadside of the hospital.

Armed with two bulldozers and weapons, a mob of nearly 100 people, led by Singh, broke down a section of hospital wall nearly 50 metres long, damaged the electrical supply and generator unit, and disconnected the water connection to the hospital, which has around 200 beds.

Despite church authorities contacting top government officials, no police turned up as the mob dug up the front yard of the emergency gate of the hospital, pulled down the compound wall and put up iron fencing inside the premises of the hospital, stretching four metres into the road.

“This is shocking. We cannot tolerate such goondaism [violent hooliganism],” Archbishop Leo Cornelius, head of the Catholic Church in Madhya Pradesh, told World Watch Monitor. “Such things are happening in many places. It is disturbing to note that government officials turn [away] in such situations.”

“I am visiting the area tomorrow,” the archbishop added.

The state, under BJP rule for nearly 15 years, has reported some of the worst attacks on Christians during the period.

When World Watch Monitor contacted Ujjain’s police chief, Sachin Atulkar, he referenced the court order mentioned by the mob, but admitted there was “inconsistency” in the order, and that the case was still “under appeal”.

When asked why the police failed to intervene, he said “the hospital was not attacked, but only the outside premises”.

When asked why the police had not registered a criminal case following two days of complaints by church officials, he replied: “We have registered a case today [14 March].”

Bishop Vadakkel explained that the hospital complex has been in church possession for 57 years, without any complaint, and that the claim to the land was first raised in 2015 – “by manipulating government land records”.

“They had been abusive and arrogant since they [first] started protests in January,” the bishop added.

Several nuns and nurses who tried to stop the attack on the hospital reported being “abused” and “pushed around”.

On the ground in Ujjain

When I arrived on the scene on the evening of the attack, 12 March, I found half a dozen members of the mob sitting inside their ‘conquered’ territory. 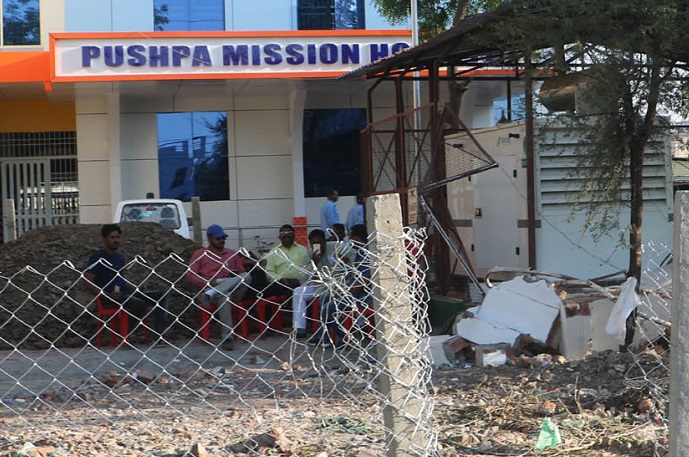 When I asked them if they could show the court order, one of them loosened his belt and opened his flies, asking me, as dozens watched: ‘Do you want to see [them] in full’?

Though they threatened to break my camera, nothing untoward happened when I told them that I was a journalist from New Delhi.

When I shared my experience with Cardinal Telesphore Toppo, Archbishop of Ranchi in eastern India, he said that what happened in Ujjain is indicative of the experience of all religious minorities under BJP rule.

“Police and government officials are told to keep quiet and not to intervene when BJP cadres do what they want,” Cardinal Toppo, former president of the Catholic Bishops’ Conference of India, said. “Similar shocking incidents are happening in [several] parts of the country.”