An Indonesian church leader has been charged with blasphemy – the first case of its kind in the country – and could face five years in prison.

Rev. Abraham Ben Moses, 52, was arrested and detained last week in his home town of Tangerang, Java, 25 km west of the capital, Jakarta, after he was caught on video, speaking to a taxi driver about his Christian faith.

In the video, which was shared widely on social media, he can be heard “quoting the Quran on marriage and claiming that the Prophet Mohammad was inconsistent with his teachings. He is also heard asking the taxi driver to convert to Christianity”, according to Catholic news agency UCAN.

The case was opened after a complaint from Indonesia’s second largest Islamic organisation, Muhammadiyah. A spokesperson said: “We want police to conduct a fair legal process. This is important because we do not want Muslims to overreact in this case.”

Unity ‘in danger of breaking’

Meanwhile, on 12 December, Tangerang’s police chief denounced a public notice by local community leaders seeking to limit the religious activities of non-Muslims in the area. 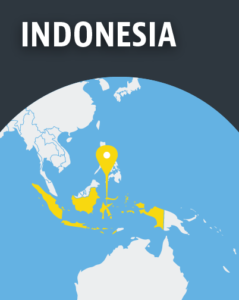 According to AsiaNews, there are around 20 non-Muslim families out of around 350, and the community leaders want the non-Muslims to worship inside their own homes and to be prohibited from inviting Muslims. They also say they should have to request permission three days in advance for the use of loudspeakers for their services.

But the police chief said they would “provide protection for every resident performing religious or other community activities … [and] routine activities by non-Muslim communities are legal as long as they comply with the rules. Law enforcement and national values as defined by Pancasila and the 1945 Constitution are not negotiable.”

In a combined Christmas message, Indonesia’s Catholic and Protestant bishops expressed their concern that Indonesia’s core values are being eroded through “unhealthy political competition that justifies any means; in the restricted fanaticism that exploits religion and in many other ways”, reports Catholic news agency Fides. In their letter, they warned against division, saying “our unity as an Indonesian nation is in danger of breaking”.

Religious intolerance and radicalisation among students in Indonesia is reported to be growing. World Watch Monitor reported last month how a survey held among 4,000 high school and university students showed that nearly 20 per cent of them would “support the establishment of a [Muslim] caliphate over the current secular government” and that one in four was willing to fight to achieve this.

Indonesia: Vote only for Muslims in 2018/19, say hardliners

UCAN now reports that similar results have come from other surveys as well, “reinforcing the notion that radicalisation efforts have targeted the younger generation, not least on campuses”. Critics say that the teaching of tolerant values is absent and that most religious education consists of a “closed-door transfer of religious understanding among students”, where they are being taught what actions a religion requires but not what it means in a social context.

A political analyst told UCAN that moderate Muslim and minority religious groups should “maximise efforts to fight against radical rhetoric by promoting concepts in favour of diversity”, as radical groups and some political parties are working together to pursue their own agendas, including the implementation of sharia (Islamic law) in the country.

The radicalisation of Indonesian youths and agenda of radical groups was highlighted during the blasphemy trial of Jakarta’s former governor, Basuki Tjahaja Purnama (better known as “Ahok”), a Christian and ethnic Chinese, earlier this year.

His case challenged religious pluralism in the Muslim-majority country, one of the Association of Southeast Asian Nations (ASEAN) countries that in October was called upon by the US Commission on International Religious Freedom to repeal its blasphemy laws. In a report, the organisation said that “ASEAN and the individual Member States have an inconsistent record protecting and promoting human rights, and even more so with respect to freedom of religion or belief”.

In a speech on Human Rights’ Day (10 December) Indonesia’s President, Joko Widodo, acknowledged that he had yet to fulfil his election promise to improve the country’s human rights’ record and to resolve past and present human rights violations, reports UCAN. Activists have criticised the lack of progress since the start of his term in 2014.

Indonesia is number 46 on the 2017 Open Doors World Watch List of the countries in which it is most difficult to live as a Christian.