With nearly 100 million Christians, the Church is the largest social force in China not controlled by the Communist Party. As a result, there are increasing efforts to restrict the way Christians operate. A considerable number of Christians are still imprisoned. Church meetings continue to be disrupted in several provinces. Churches have also been closed and landlords pressured to stop renting to Christians. In 2017 some of China’s underground churches were pushed to join the state-controlled Three-Self Patriotic Movement, while a new law on religion is being rolled out in 2018. A public letter urging the Chinese government to stop its “violent actions” against Christians has been signed by some 279 church leaders in the country, reports the St. Charles Institute. In central Henan province alone, two-thirds of churches have closed and more than 7,000 crosses have been demolished after pressure from […] 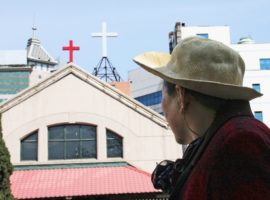 One of China’s largest unofficial “house churches” was closed on Sunday, while new measures have been introduced to curb religious activities online. Beijing’s Zion Church had received warnings following its refusal to place CCTV cameras in its auditorium at the government’s request. On Sunday afternoon, 9 September, around 60 government […] China’s churches are experiencing the worst persecution in 40 years, with a government which uses “non-religious reasons” and civil law to close houses of worship, according to the US-based St Charles Institute. Pressure is applied “through opaque queries of fire-protection measures, by questioning the legality of printed materials used by the […] Nothing has been heard from a Chinese Catholic priest missing for eight months after he was taken away by the authorities in December 2017, Catholic news agency UCAN reports. All contact with Fr. Lu Danhua was lost after the personnel of Qingtian Religious Affairs Bureau visited him in his dormitory […] The United Nations has raised alarm over the tens of thousands of Uyghur Muslims being held in detention centres in Xinjiang, northwest China. In a report last Thursday, the UN Committee for the Elimination of Racial Discrimination said the Chinese government had “transformed the autonomous region of the Uyghurs into […] One of China’s largest “house churches” in Beijing has been threatened with closure by the government following its refusal of a request to install cameras in the church building, reports Reuters. Zion Church received a letter from the city authorities in April, asking it to install 24 closed-circuit video cameras […] A Chinese human rights lawyer who fell foul of the authorities for his support of oppressed communities, including Christians, was awarded the Shahbaz Bhatti Freedom Award on 29 August, the Epoch Times reports. The whereabouts of the lawyer, Gao Zhisheng, have not been publicly known since August 2017, so the […] More than 20 churches have been closed this year in China’s north-western city of Xining and to prevent further closures the government should quickly approve applications of churches that want to become state-approved, says Wang Ruiqin, associate secretary-general of the state-aligned Three-Self Patriotic Movement (TSPM) and China Christian Council (CCC). […] China has closed several Christian summer camps for children and dismissed two priests for holding a camp, reports Catholic news agency UCAN. The two priests belonged to one of the only two unregistered Catholic churches in Tianshui diocese, in China’s northwest Gansu province. After their dismissal, the Tianshui Municipal Ethnic […]