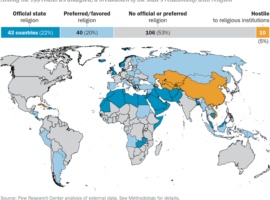 Over 80 countries favour a specific religion, either officially as a state religion or tacitly through special treatment, according to a new report by the US-based Pew Research Center. Islam is the most common state religion – 27 countries have it as their official religion, including 16 of the 20 . . . Read More