For more than 50 years, Colombia had been at war with itself. In October 2016, after four years of peace talks brokered by Cuba, the Colombian government and the rebels of the Revolutionary Armed Forces of Colombia, or FARC, brought a peace proposal to Colombia’s voters. Then, Colombia’s divided voters . . . Read More
January 24, 2017 Colombia Arauca, Communism, FARC, Juan Manuel Santos, Latin America, Missionaries, Russ Stendal

Russ Stendal.World Watch Monitor   An American missionary has received an award for his decades of work ministering to the Revolutionary Armed Forces of Colombia, or the FARC, whose 50-year fight against the government had been the world’s longest continuous war when it ended in a peace agreement last August. . . . Read More
July 4, 2016 Colombia ELN, FARC, Juan Manuel Santos, Latin America, Russ Stendal 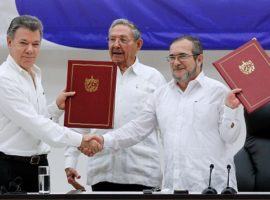 Colombians are celebrating after more than half a century of civil war was brought to an end on 23 June with the signing of a ceasefire between the government and the largest rebel group – the Revolutionary Armed Forces of Colombia, or FARC. But what will the anticipated confirmation of . . . Read More
February 26, 2015 Colombia Arauca, Communism, FARC, Juan Manuel Santos, Latin America, Missionaries, Russ Stendal 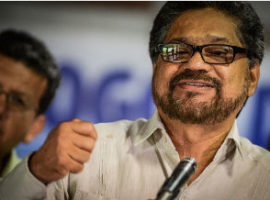 FARC Commander Ivan Marquez gives a press conference, on Nov. 19, 2014 in Havana to commemorate the second anniversary of the beginning of the peace talks with the Colombian government.ADALBERTO ROQUE/AFP/Getty Images After a half-century of continuous civil war in Colombia, a new story is beginning to emerge: Guerrillas in . . . Read More