A church in the northern Kyrgyzstan city of Tokmok had a death threat sprayed across one of its walls following a night-time robbery last week. Sources told World Watch Monitor that the graffiti was by local Islamic radicals who broke into the church building, damaged furniture and wrote: “We will kill . . . Read More
July 27, 2017 Russia Crimea, Don Ossewaarde, Jehovah's Witnesses, Pentecostals, Russia, Soviet Union, Ukraine, Vladimir Putin, Yarovaya Law Since Russia’s President Vladimir Putin signed into law what some commentators referred to as an “anti-missionary bill” in July last year, individuals and groups have been targeted because of their religious affiliation in both Russia and the annexed Crimea. After the annexation in March 2014, religious organisations in Crimea had . . . Read More
July 18, 2017 Kazakhstan Jehovah's Witnesses, Kazakhstan, Nursultan Nazarbayev, Russia, Soviet Union 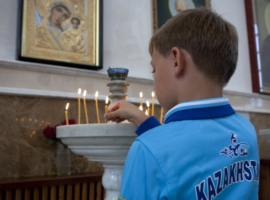 Kazakhstan’s decision to suspend operations at the headquarters of the Jehovah’s Witnesses is a symptom of the country’s growing intolerance towards religious rights, and particularly Christianity, writes Casey Michel in The Diplomat. Jehovah’s Witnesses, who had operated in Kazakhstan for 25 years with 18,000 followers, reacted by expressing concern that . . . Read More
July 12, 2017 Uzbekistan Communism, Converts, House churches, Islamic extremism, Soviet Union, Uzbekistan Azamat became a Christian in the early days of Uzbekistan’s independence, soon after the 1991 collapse of the Soviet Union, when, he says, the country “was a much freer place than it is now”. He embraced his new faith, setting up a network of house churches, and finding teachers for . . . Read More
November 23, 2016 Uzbekistan Baptists, Central Asia, Converts, Gulistan, Islamic extremism, Protestants, Soviet Union, Tohar Haydarov, Uzbekistan Tohar Haydarov.International Council of Churches of Evangelical Christians and Baptists Uzbek authorities have released a Christian convert six years into his 10-year jail sentence. Tohar Haydarov, 33, was released on parole on 8 November after serving six years and 10 months of his prison term. A judge had ruled he . . . Read More
November 14, 2016 Moldova Moldova, Russia, Soviet Union, Transnistria Moldova is the poorest country in Europe. To the east, cushioned between the Ukraine and Romania, and currently in the process of applying for European Union membership, it has this weekend decided its new President will be the pro-Russian candidate, who wants to reverse integration into the EU. (The winner, . . . Read More
September 7, 2016 Uzbekistan Islam Karimov, Soviet Union, Uzbekistan An Uzbek church leader has said he fears life will be even harder for minority Christians after the death of Islam Karimov, the country’s President since 1989. Karimov, who was installed during the Soviet era, was eventually confirmed to have died on 2 September, after a week of speculation following . . . Read More
September 2, 2016 Uzbekistan Andijan, Asylum seekers, Central Asia, Fergana Valley, Hizb ut-Tahrir, Islam Karimov, Islamic extremism, Islamic Movement of Uzbekistan, Migrants, Refugees, Soviet Union, USA, Uzbekistan On 7 July, Russian President Vladimir Putin signed into law a bill referred to by one Christian organisation as an “anti-missionary bill”. The new law, known more commonly as the “Yarovaya” law (the name of one of its authors), which will come into effect on 20 July, was formally introduced . . . Read More