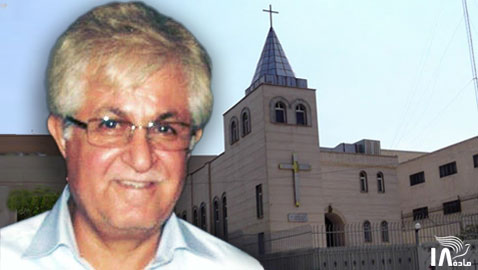 As the US Secretary of State meets his Iranian counterpart in a bid to revive stalled talks over Iran’s nuclear programme, human rights experts are keen that issues of freedom of religion are not overlooked.

This week, the UK Foreign Office has said that it’s raised its concern with the Iranian government over the arrest and detention – in Iran’s notorious Evin prison – of the former leader of the Assyrian Pentecostal Church in Tehran, as well as two others, whose whereabouts remains unknown.

The 60-year-old pastor Victor Bet-Tamraz and the two Christian converts who were his guests were arrested when Iranian state security agents raided Bet-Tamraz’s home during a Christmas celebration he was hosting on the evening of December 26; the gathering was considered to be “unauthorized and illegal.”

Mansour Borji, from the Article18 committee of the Hamgaam (‘taking steps together’ in Dari) Council of Iranian churches told World Watch Monitor that Bet-Tamraz’s family is concerned for his health as he’s a diabetic. Borji also said details of the actual charge on which Bet-Tamraz is detained are still unclear.

Borji told World Watch Monitor that Bet-Tamraz was forced to speak Farsi with his family on a very brief phone call from prison, instead of using their shared native language Assyrian, so that guards could monitor what was said.

The British Foreign Office has written: “The UK government is deeply concerned by the Iranian regime’s ongoing persecution of religious minorities – including Christians. … The UK and the international community expect Iran to live up to the right to freedom of religion and belief as set out in the Article 18 of the International Covenant on Civil and Political Rights.”

According to Mohabat News, an Iranian Christian news site, the agents temporarily arrested all 14 in the house at the time. Then they filmed all the detainees, forcing them to “introduce themselves to the camera and say why they were there and why they thought they were being arrested” and then asked them to “fill out an eight-page form printed on papers with the logo of the Ministry of Intelligence”. Among those arrested were Christian converts with a Zoroastrian [ancient Iranian religion] background, who refused to fill out the forms arguing that this was a written interrogation and could result in a criminal record for them. They said they had not broken any law and should not be subject to interrogation.”

The agents also confiscated the pastor’s belongings including his computer and Bibles. They also searched the guests, seizing their identification cards and mobile phones.

Bet-Tamraz is an Assyrian pastor officially recognised by the Iranian government; until 2009, he also worked as General Superintendent in Shahr-Ara Assyrian Pentecostal Church.

He had been holding Farsi-speaking services for years at Shahr-Ara. Then, in March 2009, the Assyrian Member of the Iranian Parliament Yonathan Betkolia announced that, by order of the Islamic Revolutionary Court, the church would be closed because it offered a Farsi-language service attended by converts from Islam.

While the church was temporarily closed after Bet-Tamraz refused to stop Farsi-language services, it was later re-opened (after he had been demoted from leadership) with a new church leader, and services continued in Assyrian only.

The number of Assyrian Christians in the country is estimated at between 10,000 and 20,000.

Since 2009 Bet-Tamraz has continued his religious activities.

Borji told World Watch Monitor that 2009 was the start of government pressure against churches which hold Farsi-language services. (Most recently, we reported on the closure in May 2013 of the Assemblies of God church in Tehran).

Borji explained to World Watch Monitor: “Over the past five years, we have witnessed arrests of several Christians and Christian converts during Christmas holidays: the government is very sensitive about these days… Also in the last five years, seven churches that offered worship services in Farsi language were closed down or forced to cease their Farsi services.

Borji also confirmed to World Watch Monitor that eight other Christians were arrested on Christmas Day at a house church in Tehran province and have since been transferred to an unknown location.

Another organisation, Middle East Concern, reported that over the Christmas period a total of 24 arrests of Christians were recorded, although it added that, separately, five other Christians have recently been released from prison, some on bail and with conditions. One, Amin Khaki, had been held since March 2014.

Iran ranks No. 7 on the 2015 World Watch List, two positions higher than the previous year.

The list ranks the 50 countries where living as a Christian is most difficult, and is created annually by Open Doors International, a worldwide ministry to Christians who live under pressure because of their faith

Open Doors said the ranking changed because of an increased deteriorating situation for Christians in Iran. It says “According to the Iranian state, only Armenians and Assyrians can be Christian. Ethnic Persians are by definition Muslim, and, therefore, ethnic Persian Christians are considered apostates. This makes almost all Christian activity illegal, especially when it occurs in Persian (Farsi) languages – from evangelism to Bible training, to publishing Scripture and Christian books, or preaching in Farsi”.