In a report on 5 June, Human Rights Watch noted that “violence in the Central African Republic has fallen from the world’s radar, but that does not mean the killings have let up. Over a dozen armed groups now roam the country, committing a range of abuses. Violence is on the rise in the eastern provinces and impunity still reigns.”

Who are the Anti-balaka?

Described in Western media as 'Christian rebels', the Anti-balaka are anything but Christian; at best they might be nominal or cultural Christians. Wearing juju (occult charms) around their necks, they fight with knives, clubs, rifles and (ironically) machetes, to rid the south of Muslims. Furthermore, they routinely threaten to burn churches and kill pastors that shelter Muslims. But as the Rev. Dieu-Seni Bikowo explained in 2014, "For us they are not Muslims or Christians. They are people - people in danger."

The country is now largely partitioned between Christian and Muslim populations; so-called Anti-balaka (“Anti-machete”) militias continue to dominate the south and west, while former members of the mainly Muslim Séléka rebels, alongside ethnic Fulani, dominate the north and east.

Tensions between the two sides have been exacerbated by the power vacuum outside the capital, where UN peacekeeping troops are less prevalent, and beyond the reach of the government. Battles between the numerous armed groups have been holding local populations hostage.

In May, World Watch Monitor reported on the circumstances Christians face in the predominantly Muslim north and eastern provinces, as dozens were killed, including a church leader. Now multiple conflicts exists, which together are leading the state towards civil war and disintegration. The government, led by President Faustin-Archange Touadéra (elected in February, 2017), is struggling to regain control of the state, and to extend its influence beyond Bangui. Fighting now is mostly within and between militias, for land and resource-control.

“The latest surge of violence in the Central African Republic seems to be more intense and sustained than the clashes that occurred earlier in the year,” says Yonas Dembele, an analyst with Christian charity Open Doors’ World Watch Research unit. “Neither the central government, nor the UN peacekeeping mission, seem able to bring an end to the conflict. While it is good that violent incidents are being investigated by the UN, hundreds, if not thousands, of Christians and Muslims have been killed over the last years in a vicious cycle of violence and reprisals and this trend looks set to continue into the foreseeable future.”

Elizabeth Kendal, an author specialising in religious liberty, gave some helpful context in a recent blog.

“While the de facto partition of CAR into a Christian south and a Muslim or rebel-controlled north has led to a decline in sectarian conflict, this has been replaced with an intra-Muslim conflict,” Kendal writes. “When Séléka disintegrated in 2014, its leaders, Michel Djotodia and Noureddine Adam, renamed their faction the Popular Front for the Renaissance in the Central African Republic (Front Populaire pour la Renaissance de la Centrafrique, or FPRC) and demanded independence for the Muslim-dominated north. This was rejected by another faction, Ali Darassa Mahamant’s Fulani-dominated Union for Peace in the Central African Republic (l’Union pour la Paix en Centrafrique, or UPC).

“This year’s “explosion of fratricidal fighting” in Ouaka and Hautte-Kotto prefectures has mostly been between the UPC and the FPRC. Because the UPC is essentially an ethnic Fulani militia supported by armed Fulani cattlemen, while the FPRC is dominated by ethnic Gula and Runga who are settle agriculturalists, the conflict is taking on ethnic dimensions, with fighters mostly targeting civilians from the opposing ethnic group.

“Meanwhile, the Anti-balaka militias have moved on from defending their families and villages, and even from exacting revenge for atrocities committed by Séléka. Now the Anti-balaka are waging a war of their own, to ‘cleanse’ the south of Muslims. Naturally this endangers all who defend and protect Muslim civilians, including UN peacekeepers and churches that offer sanctuary.

“The Anti-balaka have allied with the FPRC in their fight against the Fulani. Water, farmlands, roads and diamond mines are all at stake. “Because the Anti-balaka are now fighting the Fulani, the Fulani UPC is now targeting Christians (using to the broadest definition imaginable).”

A new graphic, produced by Open Doors, gives an insight into the main groups active in the conflict: 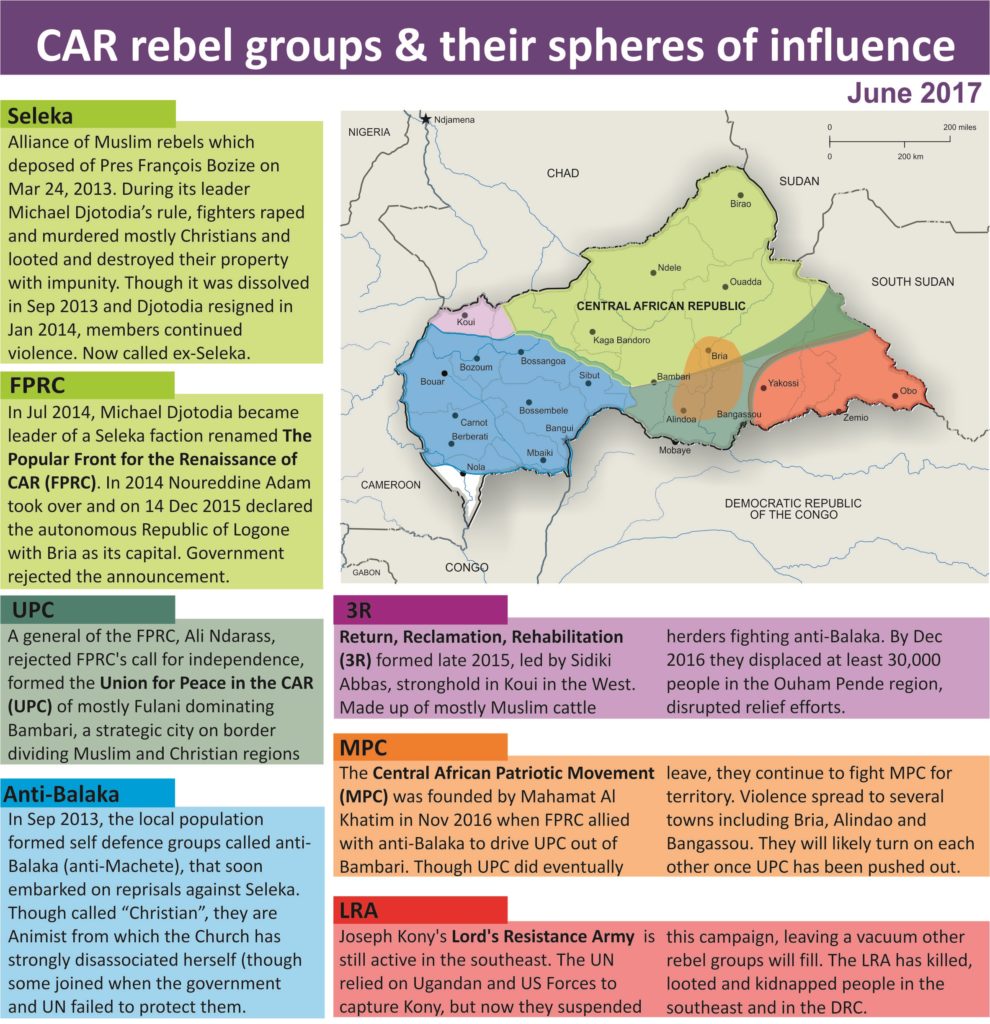 Landlocked and largely impoverished, Central African Republic has a long history of instability. Since its independence in 1960, the former French colony has endured numerous military coups and rebellions. Despite its considerable natural resources — uranium, diamonds, gold, timber, cotton and coffee — the Central African Republic is one of Africa’s poorest countries.

Its five million population is unequally divided between Christians (76%) and Muslims (13.8%).

“While most Muslims live in the far-north’s Arabic-speaking Vakaga prefecture, which borders Chad and Sudan, modernity has forced many Fulani Muslims to migrate south,” writes Elizabeth Kendal. “Some bring their cattle south to graze, which brings them into conflict with agriculturalists. Multitudes, however, have abandoned their nomadic lifestyle and settled in the cities where they have established Muslim communities, raised children and excelled as traders – so much so they have come to dominate the markets.

“Funds from Islamic states such as Sudan and Saudi Arabia and Islamic oil barons and dictators such as Libya’s late Colonel Gaddafi have enabled the building of mosques and madrassahs (Islamic schools) which not only serve the Muslim community, but offer free education and aid to poor nominal Christians. Operation World 2010 records Islam’s growth rate in CAR as double that of Christianity’s.

“In CAR, as in many places, decades of mass migration of Muslims into the cities has converged with the global trend of the revival of fundamentalist Islam, in particular the “Wahhabisation” of Sunni Muslims – a trend driven by the Wahhabi engine in Saudi Arabia. Like the global Church in general, CAR’s Church was not only largely oblivious to this trend, but was ill equipped to deal with it.”

It was against this backdrop that several rebel groups, unhappy with the government of President Francois Bozizé, formed an alliance of mostly foreign (Chadian and Sudanese) Islamic militias in December 2012. Under the Séléka (which means “alliance”) banner, they moved through the country to eventually drive out President Bozizé in March 2013.

Adding to the climate of instability is the fact that most of the Central African Republic’s neighbours – South Sudan, Chad, Uganda, and the Democratic Republic of Congo – likewise have experienced political crises, with rebellions still active in some of them.

According to the UN the incidents – including killing, rape and torture – committed by successive governments and armed groups in Central African Republic from 2003-2015 may constitute crimes against humanity. On 15 February, President Touadéra appointed Toussaint Mukimapa as the prosecutor for a Special Criminal Court, to investigate and prosecute human-rights violations committed since 2003.

“Violence continues, as does the humanitarian crisis,” writes Kendal, “with more than 800,000 internally displaced, and some 2.2 million in need of humanitarian assistance. From the outset, CAR’s Church has courageously been at the very centre of all humanitarian, peace-making and reconciliation work, despite the risks this entails.”