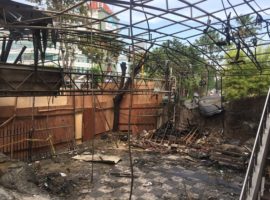 The appointment of one of the Muslim world’s “most incisive and outspoken reformers” to Indonesia’s Presidential Advisory Council signals a shift in how Indonesia is trying to combat extremism, according to religious freedom professor Paul Marshall. In May Indonesia was rocked by a number of suicide bombings orchestrated by Jamaah . . . Read More
June 7, 2018 Indonesia Ahok, Children, Indonesia, Islamic extremism, Islamic State, JAD, Jakarta, Muhammadiyah, Surabaya, Women Terrorism in Indonesia is now carried out by “entire families, including mothers and children”, one local police chief noted, three weeks on from the suicide blasts on three churches and a police station that claimed 27 lives, including 13 attackers. In raids following the series of bomb attacks, Jakarta security . . . Read More
May 30, 2018 Indonesia Aceh, Indonesia, Islamic State, JAD, Java, Surabaya, Terrorism

Indonesia’s government has approved a new anti-terrorism law that gives police more freedom to carry out preventative arrests and detain terrorist suspects for longer, as reported by AsiaNews. The proposed changes, which had been under discussion for two years, were approved by parliament on Friday, 25 May, just ten days after the . . . Read More
May 18, 2018 Indonesia Churches, Indonesia, Islamic extremism, JAD, Surabaya The leader of the Indonesian church most badly damaged by the suicide bombing attacks last Sunday, 13 May, has said he “can’t imagine” how much greater the damage could have been had the attacker detonated the bomb inside the church. Rev. Yonathan Budiantoro of Surabaya Pentecostal Church, told the Christian . . . Read More
May 14, 2018 Indonesia Indonesia, Islamic extremism, JAD, Java, Joko Widodo, Nahdlatul Ulama, Sulawesi, Sumatra, Surabaya 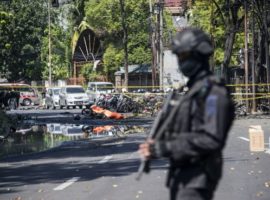 As details emerge of the shocking tactics used in the two sets of bomb attacks in Indonesia over the last 48 hours, a regional analyst has said he was not surprised by the apparent Islamist motive. “Just a few weeks before the attacks, the government published a study, according to . . . Read More
May 2, 2018 Indonesia Aceh, Indonesia, Islamic extremism, Islamic State, JAD, Jakarta, Kalimantan, Samarinda, Terrorism, Trauma A Muslim cleric alleged to have inspired an attack on a church playground in Indonesia, in which one child was killed and three injured, has denied inciting hatred. Aman Abdurrahman, 46, is facing a possible life sentence or even the death penalty for allegedly masterminding a series of bombings, including . . . Read More
July 11, 2017 Indonesia Ahok, Islamic State, JAD, Joko Widodo, Papua, Sumatra Children are “likely” to have used notebooks with Islamic State (IS) propaganda on their covers and inside, reports Reuters. Hundreds of the notebooks were seized during an investigation into the stabbing to death of a policeman in Medan, North Sumatra province on 25 June. Children’s handwriting was found in some . . . Read More
March 22, 2017 Indonesia Ahok, Bandung, Bekasi, Bogor, Churches, GKI Yasmin, Indonesia, Islamic extremism, JAD, Java, Joko Widodo, Santa Clara, Saudi Arabia Indonesian authorities in Bogor, West Java, have banned three churches from holding religious activities. According to UCANews the Methodist Church Indonesia, Huria Batak Protestant Church and a house used by Catholics for catechism classes were ordered to close their doors. Local authorities said they could not guarantee the safety of the . . . Read More