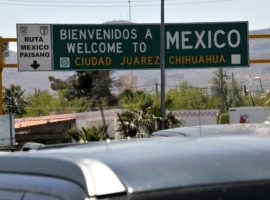 A bishop forced to pay protection money to use his own cathedral is the latest example of why, for the eighth year running, Mexico is considered the most dangerous country to be a Catholic priest. The Catholic Media Centre’s latest annual report says at least 15 priest have been murdered . . . Read More
April 6, 2017 Mexico Catholics, Converts, Jalisco, Latin America, Oaxaca, Tuxpan de Bolaños As many as 90% of Mexico’s population would identify as Christian, yet not all of them are free to practise their faith. Some come under pressure from drug cartels, either by being members of churches who meet regularly and carry money for giving offerings there and are therefore seen as . . . Read More
April 6, 2017 Mexico Converts, Guadalajara, Jalisco, Trauma, Tuxpan de Bolaños, Wixárikas A giant statue of a deer stands high above the Mexican town of Bolaños, a symbol of its significance for the locals, who believe a deer-god protects them. The belief dates back to when the Wixárika tribe first arrived in the area, in the western state of Jalisco, and encountered . . . Read More
January 17, 2017 Mexico Coahuila, Colotlán, Guadalajara, Jalisco, Latin America, Organised crime, Tuxpan de Bolaños Following their eviction on 26 January 2016, the seven families have been surviving in various temporary shelters provided for them by the state government.World Watch Monitor   A year after seven Christian families were forced from their homes in a village in the western Mexican state of Jalisco, the 30 . . . Read More
December 4, 2016 Mexico Chiapas, Chihuahua, Coahuila, Guerrero, Jalisco, Michoacán, Tuxpan de Bolaños, Veracruz Twelve of the 30 evangelical Christians evicted from the village of Tuxpan de Bolaños in Jalisco in January. Courtesy Open Doors International Mexico has a “policy of denial” about the thousands of evangelical Christians forced out of their homes because of their beliefs, according to a Mexican human rights activist. . . . Read More
June 13, 2016 Mexico Burial, Catholics, Chiapas, Guadalajara, Jalisco, Lauro Pérez Núñez, Protestants, Tuxpan de Bolaños, Veracruz Lauro Pérez Núñez has been arrested and detained several times since leaving ‘traditionalist’ church.Coordinación de Organizaciones Cristianas   Mexican Christians who branch away from the “traditionalist” village churches, which blend aspects of indigenous paganism and popular Catholicism, continue to face pressure to return to the fold or leave their villages. . . . Read More