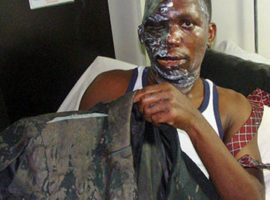 Islamic extremists threw acid on a church leader on Christmas Eve shortly after a seven-day revival at his church, leaving him with severe burns that have blinded one eye and threaten sight in the other. Bishop Umar Mulinde, 37, a sheikh (Islamic teacher) before his conversion to Christianity, was attacked . . . Read More