A Pakistani pastor was killed and another wounded Sunday in an attack outside their church in northwestern Peshawar. The two pastors were leaving the Shaheedan-e- all Saints’ Church where they had led the Sunday morning service when two men on a motorbike drove up to their car. They shot Rev. . . . Read More
November 1, 2018 Pakistan Asia Bibi, Caste, Gilgit, Hyderabad, Islamabad, Karachi, Khyber Pakhtunkhwa, Lahore, Minorities, Muzaffarabad, Pakistan, Peshawar, Punjab, Quetta, Sindh, Sweepers Asia Bibi was on death row for blasphemy, after offering drinking water which she, as a Christian, was considered to have made “unclean” by her touch. She got into an argument over this. Many Pakistani Christians – who are about 2% of the population – are children of converts to . . . Read More
April 16, 2018 Pakistan Asia Bibi, Balochistan, Blasphemy, Human rights, Islamabad, Islamic extremism, Islamic State, Minorities, Nadeem Masih, Pakistan, Patras Masih, Quetta, Religious freedom, Sajid Masih, Sawan Masih, UN 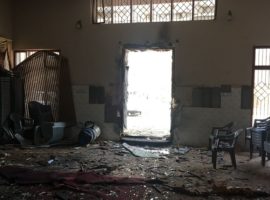 Two Pakistani Christians were killed and at least three injured in a drive-by shooting on Sunday (15 April) in Essa Nagri, a Christian-majority area in Quetta, capital of the impoverished Balochistan province in the southwest. The victims, aged 19 and 28, had just left a church service when they were . . . Read More
December 24, 2017 Christmas, Iraq, Kirkuk, Multan, Nineveh Plains, Pakistan, Quetta How will Christians under pressure for their faith celebrate Christmas? In the first of our series we hear from Pakistan and Iraq. Pakistan: Pattern of suicide attacks during festivals This is the fourth time in three years that suicide bombers have targeted churches or gatherings around Christian festivals. Last Sunday . . . Read More
December 22, 2017 Pakistan Faisalabad, Lahore, Multan, Pakistan, Peshawar, Punjab, Quetta China’s drive to develop new trading routes to the West and beyond comes with an unintended and often overlooked by-product: Chinese Christian missionaries, who are putting the self-proclaimed atheistic country in a difficult spot, according to the BBC. The latest example is the story of two young Chinese who travelled . . . Read More
July 19, 2017 Balochistan, China, Iraq, Islamic State, Lee Zingyang, Meng Lisi, Missionaries, Pakistan, Quetta A Christian from China’s underground Church says he feels safer working as a missionary in northern Iraq than he does at home. Such a perspective might seem somewhat surprising: but it says more about returning stability to parts of northern Iraq than it does about possible dangers in China. The South . . . Read More
June 21, 2017 Pakistan Balochistan, China, Islamic State, Lee Zingyang, Meng Lisi, Quetta, South Korea Pakistan has ordered a South Korean man to leave the country, accusing him of involvement in “illegal preaching activities”, after two of his students at an Urdu-language school were abducted and killed by the Islamic State group, which claimed they had been secretly preaching Christianity. “Investigations have revealed that [Juan . . . Read More
June 15, 2017 Pakistan Balochistan, China, Islamic State, Lee Zingyang, Meng Lisi, Quetta, South Korea A South Korean official says there is “no evidence” that two Chinese nationals, whose abduction and murder in Pakistan has been claimed by the Islamic State group, had secretly travelled there to work – with a South Korean – as Christian missionaries. Pakistan’s interior ministry had claimed Lee Zingyang, 24, . . . Read More